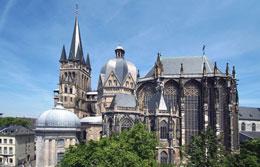 Aachen's geographic location in direct neighborhood to Belgium and the Netherlands and its close proximity to several other European countries including Britain, France, and Luxembourg make Aachen a truly European place. Aachen's European character is also reflected in the various multilingual versions of its name. While in Italian and Spanish it bears the names Aquisgrana and Aquisgr'an, respectively, which derive from the medieval Latin designation (Aquisgrani) and apparently hark back to a Celticgod of healing named Grannus, in French-speaking regions it is called Aix-la-Chapelle, in allusion to Aachen's Church of St. Mary's,the Cathedral of today. Like these Romanic versions, the German name Aachen and the Dutch equivalent Aken point to the special importance of the local waters and the hot springs.

The workshop proceedings have been...  more

The slides of all three keynote...  more